We are Spynka – story of Liubov 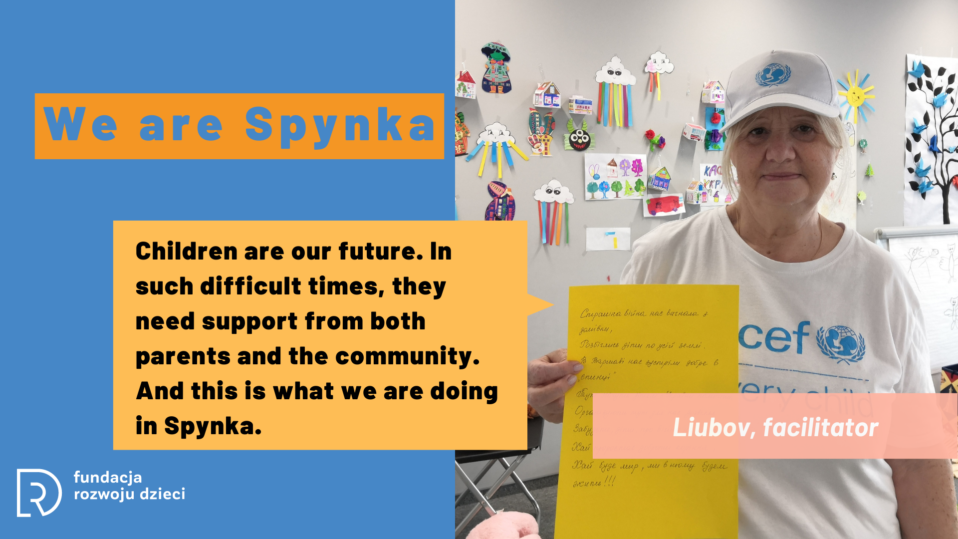 After publishing Taisa’s story we spoke to Liubov. Liubov is a facilitator at the Spynka program since April 2022. She was born in Sumy, a rural region in northeastern Ukraine. She had been living in Kyiv for 47 years. Now she lives in Warsaw, where she arrived on the 4th of March 2022 after the Russian invasion. She loves theater and music, especially fond of folk art. She expresses herself by writing poetry.

SPYNKA – 100 childcare centers in 100 days is Fundacja Rozwoju Dzieci’s program for nursery and preschool age Ukrainian children in Poland. Spynka (Спинка) in Ukrainian means a spine or a chair’s back, in Polish spinka correlates with connecting things together.

Polina: Hello! It’s very nice to meet you, Liubov. Could you tell me when you came to Poland?

Liubov: We arrived on the first of March. We first crossed the border of Hungary, and then we came here to Poland.

Polina: How has your everyday life changed? What did you never do in Ukraine, but started doing here in Poland?

Liubov: It has changed a lot. Before there was a war going on in Donbas but I only saw it on TV. I didn’t experience it myself. And when I arrived here, I realized that where there are no military actions, people do not feel the same way as I do. Because I feel anxiety. And can’t get rid of the thoughts: what is it like there? You think about your family and friends: how are they? And you can’t help but worry. And yes, we are well received in Poland. You know, I am very grateful to the Poles. I even wrote a poem “Thanks to Poles”. But you know, my real life remains there in Ukraine. I miss it.

Polina: So how long have you been working in Spynka?

Liubov: I started working at Spynka childcare center in the National Stadium in Warsaw on the 9th of April.

Polina: What do you like about working with children?

Liubov: You know – children are our future. I want to share my experiences with them. And children don’t know how to tell lies. They are absolutely honest. And when you meet them for the first time and succeed in finding a common language, it’s such a pleasure! For example, yesterday we were building towers together with the children. It was so much fun.

Polina: Is there anything challenging in everyday work with children?

Liubov: So there are a lot of children coming who suffer from psychological trauma. Not all of them are able to build relationships or communicate. Yesterday, there was a family who came from Energodar. They have nowhere to go back to. And the boy said: I don’t have a house anymore. You can read everything from the eyes of the children. They have seen a lot of grief.

Polina: And why did you want to work in Spynka? Why it is important for you?

Liubov: In such difficult times, children need support from both parents and the community. As I said before, they are our future. It is necessary to provide them with the support they need so that they can feel safe and forget about all of it. This is what we are doing in Spynka.

Polina: Thank you very much for sharing your story.

Spynka is about people. Every day, their creativity, energy, and commitment create a safe space open to every child. This space is woven from stories told in conversations and on paper through drawings and poems. “We are Spynka” gives a voice to adults and children so that they can tell the world in their own words how they got to Spynka and what Spynka has meant to them.

Your ticket for the: We are Spynka – story of Liubov

We are Spynka – story of Liubov