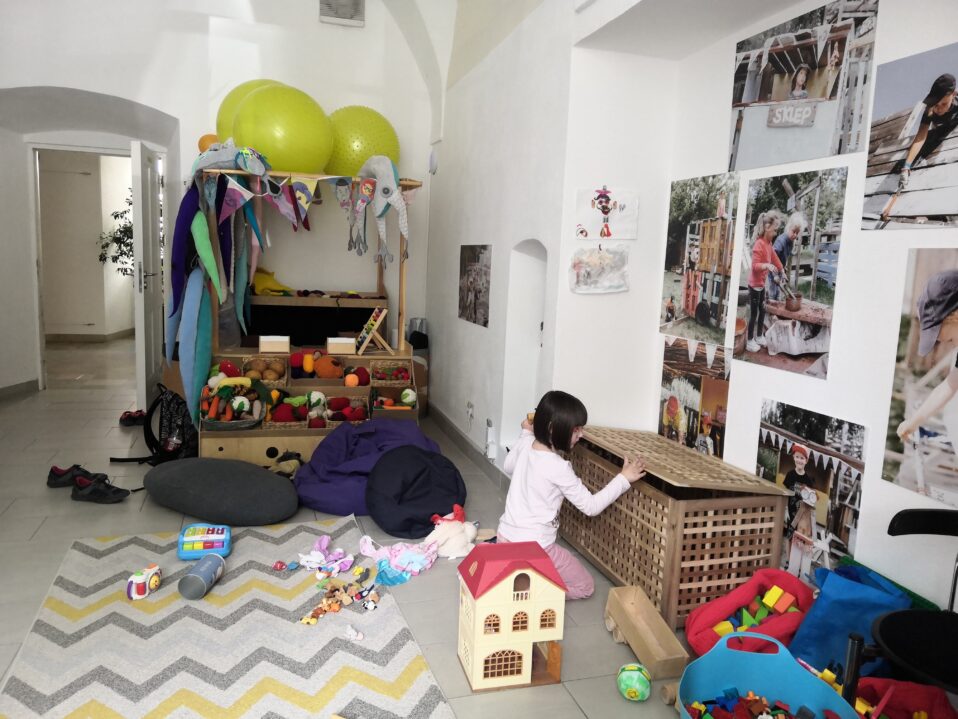 Russia’s invasion of Ukraine on the last week of February caused a mass exodus of Ukrainians. As of May 9th, more than 3.1 million refugees had arrived in Poland. According to the United Nations, this is the fastest exodus of refugees in this century. Nearly all of the Ukrainian refugees entering Poland are women and children. By most estimates approximately 40% are children under 14 years old.

When entering Poland, Ukrainian refugees getting a chance to be legally employed (as well as receive other benefits such as healthcare). A significant percent of Ukrainian women want and need to work but based on the Polish Ministry of Work statistics only 70,000 of Ukrainians has been employed so far. In order to work, mothers need childcare. Unfortunately, even before the war began, there was a significant shortage of public childcare for children 0 to 6 years old in Poland.

Refugees receive a small stipend from the government while in Poland, the amount they receive is barely sufficient to live a healthy life. Most Ukrainian women in Poland are now effectively single parents with single or no incomes. If they are married, their spouse is now likely involved in the war effort and no longer receiving a salary. Childcare is needed in order for Ukrainian women to become self-sufficient and cover their basic needs.

In addition to scarce resources of every type, children and their mothers entering Poland frequently suffer from long term stress, anguish and emotional trauma. This trauma comes from many sources including directly witnessing the horrors of war, fears for fathers/husbands fighting the war, and becoming a “single parent family” in a new and different country.

It is essential for Ukrainian refugee families to have the chance to gradually adjust to a Polish environment that is unfamiliar – to build trust and a sense of belonging. This is especially important for children uprooted from their homes in Ukraine and missing their fathers who stayed behind to defend the country.

“The childcare centers that FRD is opening, allow Ukrainian mothers to take back some control in their lives and they can do so knowing that their children are being well taken care of,” said Monika Rościszewska-Woźniak, chair of the board of FRD.

Developed by FRD, the childcare model consists of two stages of creating childcare centers for nursery and preschool age Ukrainian children in Poland that addresses the special emotional needs of refugee families.

The first stage of each program is a facilitated Playgroup led by trained FRD Ukrainian, Russian and/or Polish speaking teachers. The play groups are an initial step in developing comfort for children and mothers before phasing into a full day nursery environment. Also, because a play group has significantly less regulation than full day nursery or preschool, it allows programs to be opened extremely quickly. The playgroups are up to 2 hours for nursery age children and up to 5 hours for preschool age (parents are not required to be present the entire time).

After 60 – 90 days the play groups phase into coop style full day nursery and preschool. Both the nurseries and preschools are led by FRD teachers that have been trained by FRD and have been taught specifically to work with children suffering from trauma. FRD also contracts with psychological service networks to work with children for cases where trauma is too severe to be addressed exclusively in a classroom setting. As of May 1st, FRD has begun training over 100 teachers, 70% of whom are Ukrainian.  Having Ukrainian teachers in the classroom is valuable to student emotional stability. Providing jobs for Ukrainians is also an important part of creating economic stability for the Ukrainian refugee community.

Local Municipalities have been charged with caring for Ukrainian refugees in their jurisdiction but they do not have the resources to open nurseries and preschools which focus on the unique challenges of Ukrainian refugees.  FRD makes agreements with these municipalities that in exchange for providing space, FRD recruits and trains teachers, provides oversight and runs the programs.

“Our plan is to open 100 programs in 100 days, but if the war doesn’t end and we need to open 300 centers in 300 days then we will prepare to do that.” Said Rościszewska-Woźniak.